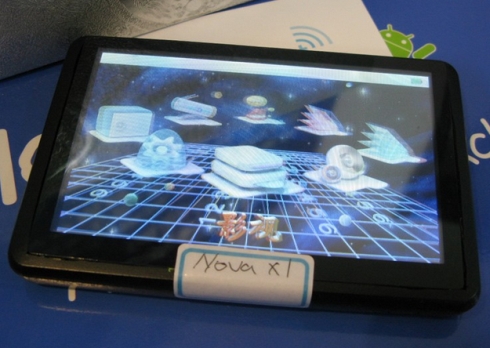 Sitting in a movie theater wearing 3D glasses is one thing. Sitting at home in front of the TV is another. And putting them on to stare at a handheld device? Come on. Nobody’s going to do that.

That doesn’t mean that 3D isn’t coming to mobile devices though. We already know that Nintendo plans to launch a version do the Nintendo DS handheld gaming system with a 3D screen. What’s exciting about the product though, is that you won’t need glasses to get the 3D effect. You should be able to see 3D graphics when looking at the device with your own two eyes.

Now it looks like we might see similar technology in portable media players and tablet computers. Engadget Chinese spotted a 3D prototype called the Rockchip Supernova X1 recently, and word on the street is that we could see more of this little guy at IFA in Berlin next month.

The display isn’t always stuck in 3D mode. You can adjust the effect or turn it off. That’s probably a good idea, since the amount of 3D content available for the device is likely to be pretty slim right now.

You can check out a video after the break, but while the tablet is 3D capable, the video was filmed with an old fashioned D camera which doesn’t really show it off. On the bright side, the video includes your daily recommended allowance of Jpop.