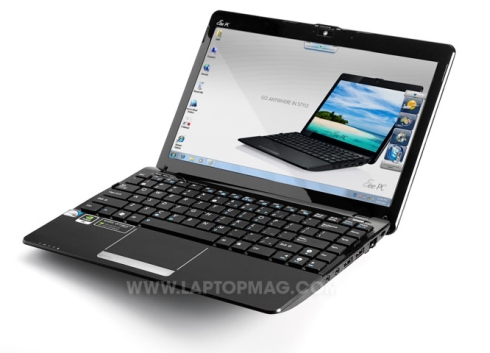 The Eee PC 1215N is a 12.1 inch ultraportable laptop from Asus which sports a dual core 1.83GHz Intel Atom D525 processor and second-generation NVIDIA ION graphics. The folks at Laptop Magazine have posted a detailed review, and while it’s not the first I’ve seen, it’s worth paying attention to, because Laptop says it’s the best 12 inch notebook available for under $500… and that means something because the magazine has reviewed an awful lot of 12 inch notebooks.

According to Laptop Magazine the Eee PC 1215N performed well above average in benchmarks, besting machines with single core Atom processors as well as newer AMD Neo CPUs. Where the Eee PC 1215N really kicks into high gear though, is in graphics benchmarks. It scored a whopping 2692 in 3DMark06, which is far higher than scores from notebooks with first generation NVIDIA ION graphics or ATI Radeon HD 4225 graphics.

What does that mean? Basically you should have no problems watching HD video playback, although Flash video playback is hit or miss — partly because it can tax the CPU if there are text overlays.

Laptop Magazine was also impressed with the notebook’s battery life, which at more than 5.5 hours is pretty good for a machine packing this kind of graphics power.

That said, if you’re looking for a machine with a high performance CPU, you can certainly do better. The Intel Atom D525 is still basically a low power processor. It’s just a dual core low power processor. But it sounds like it provides good enough performance for most day to day tasks, and when you bundle it with the NVIDIA ION graphics, you can get a pretty pleasant experience out of this notebook.

The only catch? While Laptop calls it the best notebook for under $500, you can’t actually get it for that price yet. The only US retailer carrying it at the moment appears to be ExcaliberPC, which is charging $549.