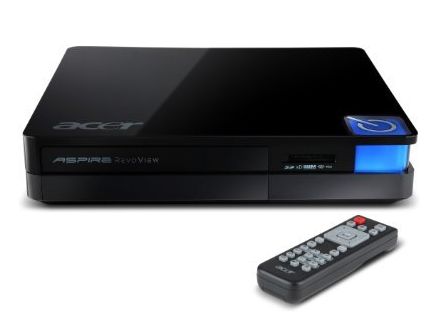 You could make the case that Acer’s line of Aspire Revo nettops are already aimed at the multimedia market. They’re about the same size and shape as a Nintendo Wii and are clearly designed to look good next to a TV. These little computers tend to have low power Atom processors but high performance NVIDIA ION graphics for pumping out HD video.

But if you’re looking for something a bit cheaper than a full-fledged computer, with the added benefit of consuming less power, Acer plans to begin shipping a new device called the RevoView soon. The company first showed off the Acer RevoView a few months ago, and now nDevil reports that it will be available in Germany by the end of August, with prices starting at about €149 (about $198 US).

That price will get you a set-top box with a remote control and the ability to play HD video from a hard drive or stream content over your home network. It looks like the hard drive is also removable, allowing you to insert it into a PC drive bay. That means you can store all of your PC media on the drive, and then remove it and plug it into the RevoView when you want to access your media on your TV. The device may also be able to access on-line media.