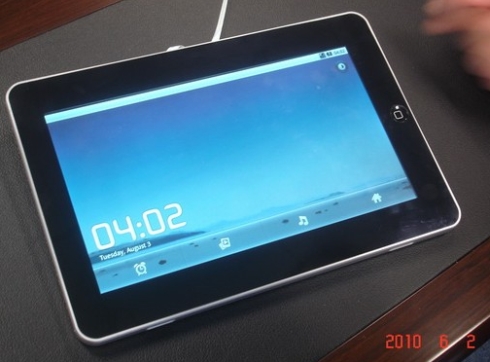 We’ve seen roughly 2,743,138 companies introduce Google Android powered tablets over the last 6 months or so. But very few have actually made it to market in the US. While we wait for big name companies such as Toshiba, Lenovo, Asus, and HP to launch Android tablets, there are a handful of options available. Archos and Camangi already sell 5 and 7 inch models in the US. And some companies have started importing the cheap Chinese tablets we keep seeing to sell in the US.

WiiPad is one of those companies. While the company from having a ridiculous name that looks like someone threw darts at a consumer electronics buzzword chart, the tablets actually look kind of interesting.

First up is the WiiPad Slim 7 inch Android tablet, which has a starting price of just $155.02. This model has 128MB of RAM, 2GB of solid state storage, and an SD card for additional storage. It has a 7 inch, 800 x 480 pixel display, 2 USB ports, WiFi, and a 2500mAh battery.This model runs the increasingly outdated Google Android 1.5 operating system.

I’m a bit confused about the processor, which is described as both 600MHz and 1.1GHz.  My money is on the former. WiiPad says the tablet can play 720p HD video. The most exciting thing about this model is probably the low price tag.

If the 10.2 inch model looks familiar, that’s because it may just be a rebranded version of the Zenithink 10.2 inch tablet we spotted a few months ago.

Update: The folks at WiiPad were kind enough to send me a demo unit of the WiiPad Slim Plus to review. You can check out my first impressions and a brief video here.

9 replies on “WiiPad Android tablets: Two buzzwords in one”