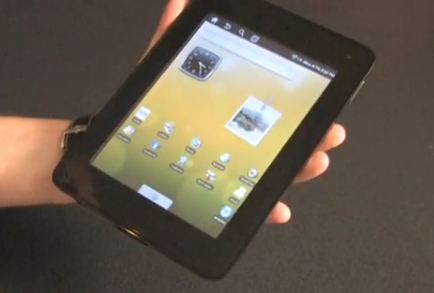 Velocity Micro plans to launch a line of Google Android powered tablets with prices ranging from $149 to $299.

The first to hit the streets will be the $199 Cruz Reader and the $149 Cruz StoryPad. Both are 7 inch tablets with 800 x 600 pixel touchscreen displays, and both are due out in August.

The Cruz Reader has 802.11b/g/ WiFi, and while Velocity Micro is calling it a reader, it comes complete with a web browser, video games, media player, calendar, notepad, and other apps.

The Cruz Reader also has an accelerometer, USB port, and an SD card slot. It comes with a 2GB SD card for storage, and the battery should be good for up to 10 hours of run time. The tablet will ship in the US with the Kobo Android app pre-loaded, for access to over 2 million eBooks.

The company also says you’ll be able to download apps, magazines, and videos from the “Cruz Market,” which sounds to me like another way of saying that the Google Android Market will not be available out of the box — although it’s possible Velocity Micro simply wants to try out its own market to see if it can grab a little bit of revenue from media sales.

The Cruz StoryPad is a “kid-friendly” model with a drop-resistant case. It comes with a number of audio books preloaded, and  amedia player for audio and video playback. It’s available in pink, blue, and green.

In September, Velocity Micro will also add the $299 Cruz Tablet to its lineup. This model features 802.11n WiFi, 4GB of built-in  storage, and an 8GB SD card. It has an integrated microphone, and interestingly, a 7 inch, 800 x 480 pixel display. That’s right, it has a lower resolution screen than the tablets that run half the price. But that’s because this model is designed for multimedia playback. I guess.

You can check out an overview of the Cruz Reader tablet after the break.