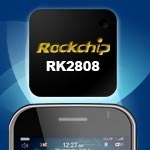 Chinese chip maker Rockchip is introducing a new 1GHz CPU for tablets and other mobile devices. The Rockchip RK2808 is an ARM-based chip with support for 256MB of memory and screen resolutions up to 1024 x 768 pixels. We’ve seen a number of Chinese tablets with Rockchip processors in the past, but most have been stuck with an earlier 600MHz processor that could only handle 800 x 480 pixel display resolutions. The new chip will also be able to decode 720p HD video. Rockchip’s new processor will be support twice the memory of its earlier chips, and the RK28080 can support Google Android 2.1 and Android 2.2 mobile operating systems. Systems with Rockchip’s older processors typically ran earlier versions of Android. via NewGadgets.de and MP4 Nation