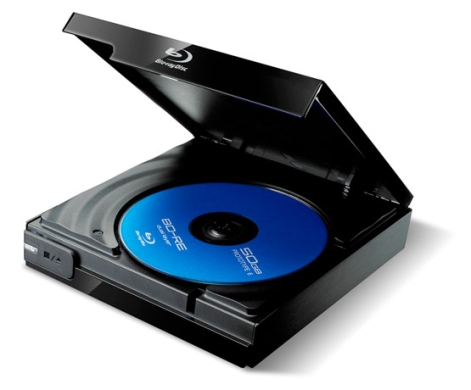 Remember when portable Blu-Ray drives were ridiculously expensive? Well the Plextor PX-B120U certainly isn’t going to come quite as cheap as a DVD drive, but this little Blu-Ray drive runs just $99.99. So now I guess they’re just kind of expensive.

The drive also happens to be USB powered, which means you don’t need to carry around a power brick in order to run the thing. Just plug it into your computer and you can watch HD video on the go. On the down side, Plextor PX-B120U is simply a BD-ROM drive, which means you can watch videos, but you can’t burn them.

Sure, the PX-B120U ain’t going to work with most low cost netbooks with integrated Intel graphics. But if you have a system which can handle 1080p HD video playback, then this Plextor Blu-Ray drive might be one of the cheapest, most portable options for accessing your Blu-Ray collection on the go. You know, if you actually have a Blu-Ray collection instead of just a bunch of ripped or downloaded movies.

If you have a notebook with NVIDIA ION graphics, a Broadcom Crystal HD video accelerator, ATI Radeon HD graphics, or pretty much anything more powerful than the integrated graphics that come with Intel Atom chips, you should be able to use the Plextor PX-B120U or similar BluRay drives.