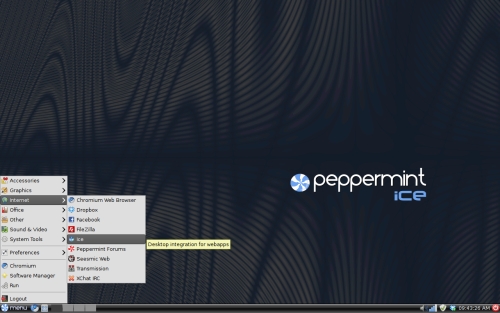 A few months ago Peppermint OS hit the web and caused a bit of a stir. Basically Peppermint is yet-another Linux distribution based on Ubuntu. But what makes it special is the focus on allowing users to install native apps and web-based apps. Sure, Peppermint’s not the only OS with a focus on Cloud-based apps. There’s also Jolicloud and the upcoming Google Chrome OS. But Peppermint has the added benefit of being able to run desktop apps and looking more like a familiar Linux, Windows, or Mac desktop operating system.

This week the developers launched Peppermint Ice, a new version which replaces Firefox and the Mozilla Prism web app installer with Google’s Chromium web browser. Chromium also allows you to install web apps as if they were desktop apps, and Peppermint Ice comes with shortcuts for facebook, Google Docs, Hulu, Pandora, and Seesmic preloaded. It also has native apps including DropBox, Transmission Bittorent client, and XChat.

What’s more, Peppermint Ice is one of the fastest booting operating systems around. The developer says it boots in as little as 6 seconds on his notebook, while blogger Lee Mathews says it loads in just 10 seconds on his Gateway netbook with an Intel Atom processor. That’s about how long it takes to launch some “quick boot” software such as SplashTop or Hyperspace, but Peppermint is a far more powerful OS than either of those options.

One reply on “Peppermint Ice: Fast-booting Linux distro with its head in the Cloud”