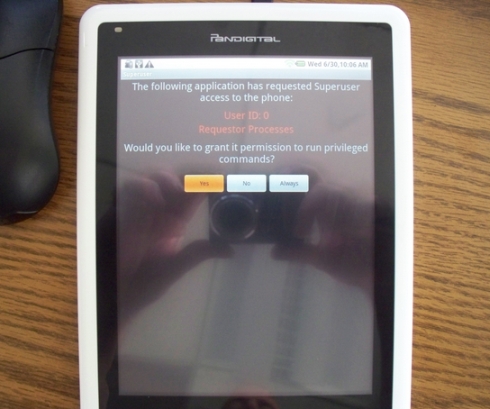 The Pandigital Novel bucks the eBook Reader trend by shipping with a color LCD display instead of a low power, high contrast E Ink screen. It also runs Google Android, although the Pandigital Novel has a locked down version of Android with just a few apps inclduing the eBook reder, a photo viewer, media player, and web browser.

The device may not get the same kind of battery life you’d get from other eBook readers, but it should run for up to 6 hours, which isn’t bad for a mobile device with a 7 inch, 800 x 600 pixel touchscreen display, WiFi, and Google Android.

Now one user has figured out how to gain root access to the Pandigital Novel, which is the first step toward installing third party apps, adding functionality, or even upgrading the Android operating system or installing custom ROMs.

The only catch? There are no physical buttons on the tablet. Most Android apps are designed to work with the back, menu, home, and search buttons found on Android smartphones. That means while you theoretically can root a Pandigital Novel and install officially unsupported apps, there’s no guarantee they’ll work perfectly. In fact, it’s almost guaranteed that many apps won’t work perfectly… but they do reportedly work.