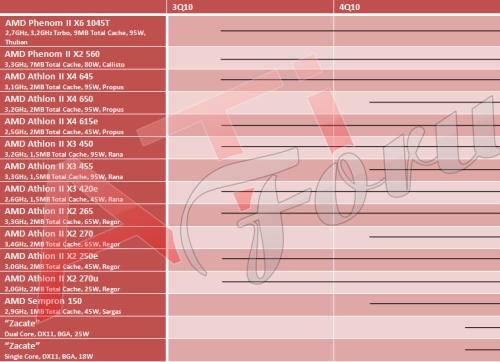 AMD recently started pumping out low power, moderate performance chips for netbooks and laptops, and from what I’ve seen so far I’ve been pretty impressed. Now it looks like the company plans to offer a similar chipset for low power mini-desktop computers, also known as “nettops.”

The folks at ATiForum in Germany have snagged a leaked product roadmap, which shows two new chips with the code name “Zacate.” One will be a single core chip with a total power draw of 18W, while the other will be a dual core chip with a 25W TDP. Both will be able to support DirectX 11  graphics. And both are due out late in the 4th quarter of 2010 — probably just in time for the holidays.

As with any leak, it’s best to take this with a grain of salt until we receive official confirmation from AMD. The roadmap could be a fake, or at the very least subject to change.