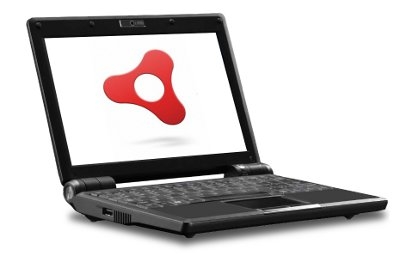 Intel’s AppUp Center is an app store for netbooks, tablets, and other devices with Intel Atom processors. The idea is to provide users with a one-stop shop where users can purchase apps or download free apps that they know will work on their hardware. Up until recently, developers could write apps in C or C++. This week Adobe and Intel announced support for Adobe AIR apps as well.

That means that developers can easily write cross-platform apps that are designed to run on any system that supports AIR (including Windows, Linux, Mac, and soon Google Android) and submit them for inclusion in the AppUp Center through Intel or Adobe’s developer programs. Developers can set prices for their apps and track the number of downloads through the AppUp Center tools.

The SDK for Adobe AIR apps is already available, and Intel will start accepting AIR-based apps for inclusion in the AppUp Center on August 14th.

I’m still not 100% sold on the need for an App Store for netbooks. One of the things that sets netbooks apart from more limited devices such as the iPad or an iOS or Android smartphone, is the fact that you can run full desktop versions of Windows, Linux, or other operating systems on a netbook. And that means that most software designed for larger computers will run on netbooks — although you may have to tweak the display settings or deal with a little sluggishness on some newer software meant for more powerful systems.

Still, I suppose the idea of app stores for desktop operating systems isn’t completely foreign. After all, the Linux repository system sort of provides an app-store like experience for users of Ubuntu, Fedora, or other popular Linux-based operating systems.