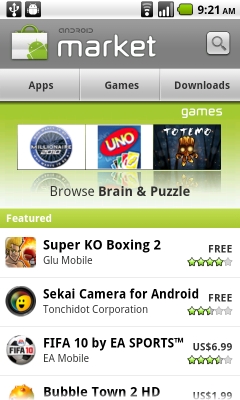 The Google Android operating system was initially developed for smartphones. But dozens of companies seem determined to bring Android-powered tablets to market to compete with the Apple iPad. And the touch-friendly mobile operating system actually works pretty well on tablets. But there’s one major problem: Google only allows phones to access the Android Market, where you can find about 100,000 free and paid apps to download.

Google has never made it entirely clear why tablets and smartbooks don’t have full access to the Android Market. But one reason is likely because different devices have different physical properties — and apps designed for a phone (with GPS and 3G with buttons for search, home, menu, and back) might not work on a tablet or a laptop.

But it looks like Google may be preparing to open the Market to Android tablets… or to create a parallel market for tablets. I’m not really sure which way Google is going here. But Notion Ink, makers of the long-anticipated Adam tablet, say that they’ve been testing alpha App and Content stores on their products.  Adobe Flash is also working without any battery issues.

There’s a chance that Notion Ink is referring to the Google Chrome operating system rather than Android. After all, we already know that Google Chrome will be aimed at tablets as well as netbooks, and that a market for web apps is in the works. But since Notion Ink has been showing off a tablet running Google Android for the past 6 months, I think it’s more likely that we’re talking about an Android Market for tablets. Or maybe that’s just wishful thinking.