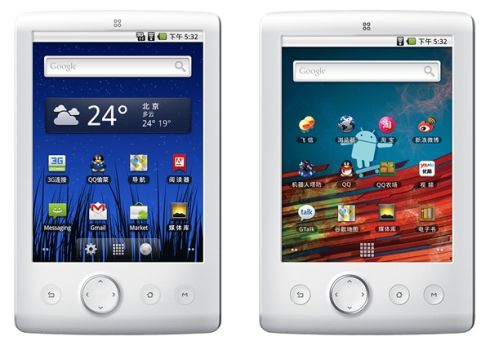 Chile (the company, not the country) has introduced a new 7 inch Android tablet in China. The Chile T7-3G features a 7 inch, 800 x 600 pixel display, a 720MHz ARM11 processor, and runs Google Android 2.1. It’s not exactly a speed demon, but it looks like this Chinese tablet would make a pretty decent eBook reader with the added bonus of support for HD video playback as well as the ability to surf the web and run third party Android apps.

The tablet has 256MB of RAM, 2GB of flash storage (most of which is used by the OS), and an SDHC card slot that supports up to 32GB of additional storage.

The Chile T7-3G also supports 802.11b/g WiFi and 3G mobile broadband networks. The spec sheet suggests that you can also send text messages with the tablet, which suggests that you may also be able to make phone calls — and perhaps even download apps from the Android Market.

The tablet weighs less than a pound and comes with a 4500mAh battery. Unfortunately I doubt we’ll see this tablet outside of China anytime soon.