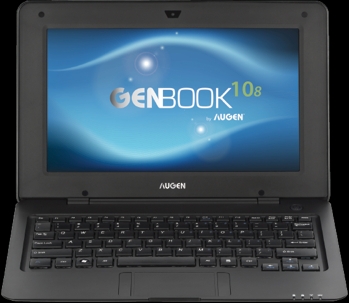 Up until a few days ago few people had heard the name Augen. But now that KMart is selling 7 inch tablets Android netbooks and tablets from the company for between $99 and $150, it seems like a day doesn’t go by without a bit of Augen related news. Here’s today’s dose:

While KMart is only stocking a 7 inch netbook from Augen at the moment, Augen has also introduced a 10 inch model. This version looks a lot beefier than the 7 inch netbook, with twice the RAM, double the CPU clock speed, and a higher resolution display and alrger keyboard.

There’s no wor don the price for htis model, but I suspect it will cost a bit more than the $99 GenBook78 netbook.

While the Augen GenTouch78 tablet is one of the cheapest Android tablets around — and is one of the only models you can actually walk into a store in the US and pick up (if you happen to live near one of the few KMarts that have the tablet in stock), it’s still a cheap piece of consumer electronics. So it’s not surprising that early adopters are noticing a few problems.

First, Augen notes that many users are upset that it has a 2.5m headphone jack instead of a more standard 3.5mm headphone jack. But the company is promising to send a set of earbuds to users who write in and request them.

Second, there’s a software glitch that misrepresents the amount of available memory, which Augen says it is fixing. Finally, much to my surprise, the Augen GenTouch78 tablet does apparently ship with the Google Android Market preloaded. It just doesn’t appear to let users download and install software right now, but Augen says a software patch which is coming soon should fix that issue.