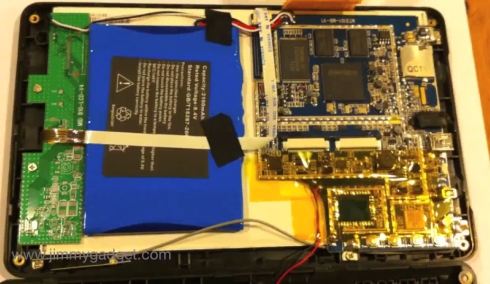 The Augen GenTouch78 Google Android tablet has only been available in the US for a few days, but I’m going to go out on a limb and guess that at least half of the units sold have gone to hardcore early adopters and hardware hackers looking for a cheap Android tablet to play with. Case in point: a group of users have already discovered how to gain root access to the tablet allowing you to do things such as adjust the CPU speed.

There’s no support for overclocking yet, but by tweaking the minimum CPU usage settings you should be able to make the tablet run a little more smoothly or provide better battery life.

Another user took the back cover of the tablet to see what’s on the inside. Basically you only need to remove 7 screws to take the back cover off — which is a good thing, because as I discovered if you slide the microSD card in the wrong way it can get lost in the case. Removing the cover is one of the easiest ways to get it out.

On the inside of the tablet you can find a 2100mAh battery, a Telechips TCC8902 processor, which runs at 600MHz (even though Augen says the tablet has an 800MHz processor).

You can check out the dissection video below for more details.

While there are a lot of smart people looking at this tablet to see what it can do, it might be a little while before we see custom ROMs for the tablet. The recovery mode doesn’t actually let you access any of the functions in the recovery menu — which will make it difficult to load new firmware.

After using the tablet for the past day, I also have a few more observations to share:

You can keep up on the progress of the GenTouch78 hackers at the SlateDroid and xda-developers forums.