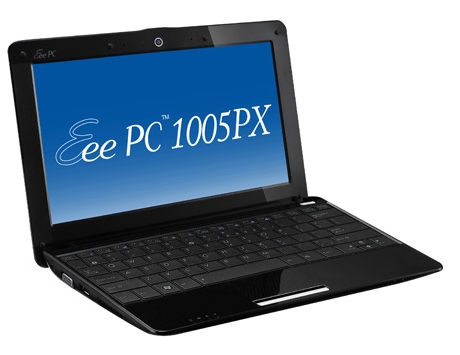 Most of the 10 inch netbooks Asus has released this year ship with glossy displays. The recently introduced Eee PC 1005PX bucks the trend with a matte, non-glare screen which is a bit easier to see in direct sunlight.

But there are a few other differences, which would seem to suggest that at least the base model of the Eee PC 1005PX will carry a lower price tag than its predecessor. While the matte display might appeal to some, this netbook has 2 USB ports instead of 3. And the 6 cell, 48Whr battery i srated at up to 8.5 hours. That’s pretty good, but not as good as the 63Whr battery that came with the Eee PC 1005PE I reviewed.

The Eee PC 1005PX has a number of different configuration options. It can run Windows 7 Starter Edition or Windows XP Home, there’s a Bluetooth 2.1 option, and the hard drive comes in 160GB, 250GB, and 320GB varieties.

The Eee PC 1005PX isn’t the only Asus netbook to launch this year with a matte display instead of glossy. The Asus Eee PC 1001P budget model netbook also has a non-glare screen.