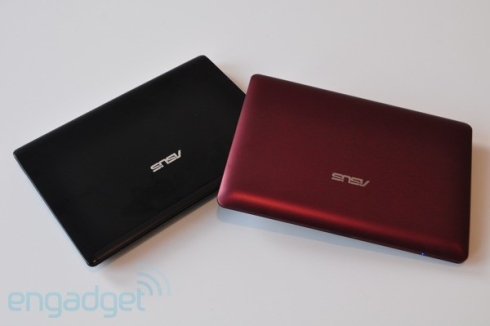 Asus recently added a few higher end netbooks to its Eee PC lineup. The Eee PC 1015PE and 1018P have all the usual netbook specs including Atom N450 processors, GMA 3150 graphics, 1GB of RAM, and Windows 7 Starter Edition. But they have sleek aluminum cases and just look nicer than most earlier Asus netbooks. But is that enough to justify the $350 starting price tags these models carry at a time when you can pick up a number of other netbooks for under $300?

I should have an Asus Eee PC 1015PEB unit to test soon, but Engadget’s Joanna Stern beat me to the punch and posted a review today of both the 1018P and the 1015PE.

Joanna seems rather taken with the design of these two netbooks, particularly the Eee PC 1018P which measures just 0.7 inches thick and weighs just 2.4 pounds — but which still manages to pack a 6 cell battery. The Eee PC 1015PE is a bit chunkier and looks more like the other netbooks Asus has released this year. The main difference is the lid.

In terms of performance, these netbooks don’t seem to hold any surprises, but Joanna wasn’t all that impressed with the battery life — at least not compared with other Intel Atom N450-powered netbooks launched this year. Bear in mind Engadget tests battery life by running a video loop continuously. So while neither netbook lasted for longer than 5 hours in the Engadget test, you could probably get closer to 5.5 or 6 hours of run time if all you’re doing is surfing the web.