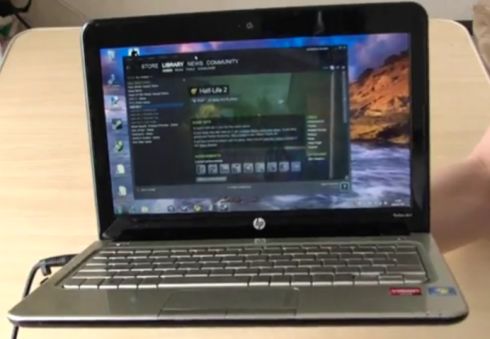 AMD’s Nile platform for netbooks and thin and light laptops includes a range of chips such as the 1.7GHz single core AMD Athlon II Neo K125 CPU and the 1.5GHz dual core AMD Turion II Neo K625 processor. They all have a few things in common: They tend to be more powerful than Intel Atom chips at most tasks, and they tend to come bundled with ATI Radeon HD4225 graphics, which provides significantly better performance than the integrated graphics that come with Intel’s Atom-based chips.

What that means is that you should be able to watch HD video on a system even with the slowest AMD Nile-based chip. But it also means you should be able to play many video games that require DirectX 10.1 and decent 3D graphics performance. No, these systems aren’t designed to play bleeding edge games. But they can handle a number of relatively modern games with ease.

Peter from NetbookNews put together a video showing an HP Pavilion dm1z laptop with an AMD K125 processor and ATI Radeon HD4225 graphics playing a bunch of video games. While a few were a bit choppy, the vast majority of the games ran very smoothly on this 11.6 inch laptop. And that’s impressive because it features the cheapest and slowest chip in AMD’s Nile lineup — the same chip used in the Acer Aspire One 521 netbook I’ll be reviewing over the next week or two. I probably won’t be quite as thorough as Peter, but I do plan to test the graphics performance of the laptop as well.

You can check out Peter’s video after the break.

4 replies on “AMD Nile platform vs. video games: Who wins?”