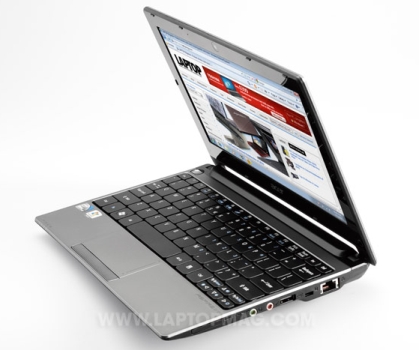 The Acer Aspire One D260 netbook is sort of what you would get if you crossed an Aspire One 532h with an Aspire One D521. If that doesn’t mean anything to you, all three netbooks are 10 inch machines with 1024 x 600 pixel displays and low power processors. But like the 532h, the Acer Aspire One D260 has an Intel Atom processor and GMA 3150 graphics… but it has almost the same case design as the Acer Aspire One 521 (which has an AMD chipset instead). The folks at Laptop Magazine took the new Aspire One D260 for a spin and found that it performs pretty much as you’d expect a netbook with an Intel Atom Pine trail processor. And that’s not a bad thing at all, given the low $299 price tag for this model. The netbook also has a 1.83GHz Intel Atom N470 processor, 1GB of RAM, a 250GB hard drive, and 802.11b/g/n WiFi. There’s no Bluetooth, and the 6 cell battery lasted for about 5 hours in Laptop Mag’s test. That’s below average for an Atom powered netbook, but 5 hours really isn’t that bad for any laptop at this price point (although there are models such as the Asus Eee PC 1001P which get much better battery life and cost about the same). For more details, check out Laptop Magazine’s review. It’s worth pointing out that while we’d seen reports suggesting that this model would be available with Google’s Android operating system running alongside Windows 7 Starter Edition, it doesn’t look like Acer is offering that configuration at the moment.