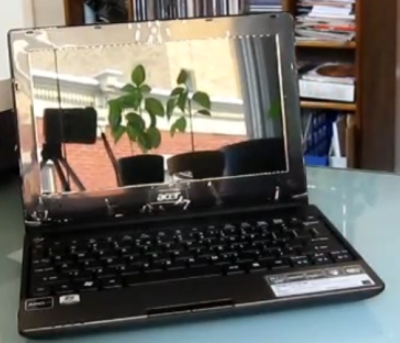 The Acer Aspire One 521 is a nice looking mini-laptop. That’s not too surprising. Acer has been pumping out netbooks almost as long as Asus and HP, and the company has had plenty of time to tweak the design. The keyboard is nearly full sized, the lid is quite classy looking, and there are two distinct buttons below the touchpad — which is something you don’t find on many netbooks these days.

But it’s not the design that sets the Aspire One 521 apart. It actually looks a lot like several other 10 inch netbooks that Acer has released in recent months. What makes this little laptop different is the chipset: It’s powered by a 1.7GHz AMD Athlon II Neo K125 single core CPU and ATI Radeon HD4225 graphics.

Performance0-wise, these components should allow you to watch HD video on the Aspire One 521 and it should outperform a typical Intel Atom-powered netbook in some performance tests. But I’ll be curious to see what that performance boost does to battery life.

Acer sent me a demo unit to review and I haven’t really had time to put it through the paces yet. But you can check out my unboxing and first impressions video below, where I take a look at the physical design of the laptop. Sorry about the band of light on the left side of the video. It’s 100 degrees in Philadelphia today and I was a little careless while trying to shoot this video quickly before turning the air conditioning back on.

One reply on “Acer Aspire One 521 unboxing – Video”