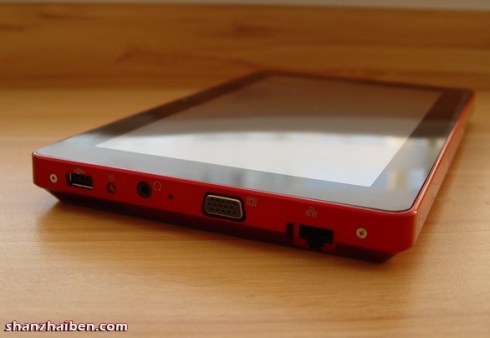 Cheap Google Android powered tablets appear to be a dime a dozen in China these days, even if they’re not all that common in the US and Europe yet. But what about cheap Windows 7 powered tablets? It looks like China is getting its fair share of those as well. One of the latest is a rather attractive 10 inch model with a 1366 x 768 pixel display and a 1.66GHz Intel Atom N450 processor.

What makes this tablet from Haina Digital attractive is the reasonable $370 price tag. Instead of paying a premium price for a tablet that’s basically a netbook without a keyboard, it looks like this tablet will sell for a netbook-like price.

Not only is this tablet significantly cheaper than, say, the Apple iPad, but it also features Ethernet, VGA, and USB functionality. On the other hand, it’s running an operating system that’s really designed for use with a keyboard and mouse rather than fingertip input. On the third hand (you have one of those, right?) you can use those USB ports to plug in a mouse and keyboard if you really want to.