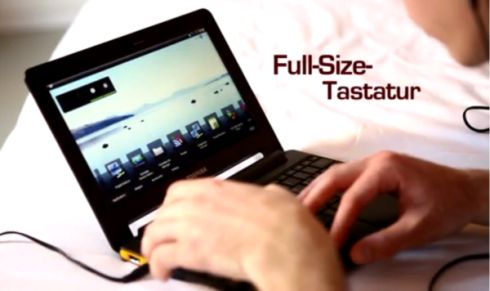 The Toshiba AC100 probably won’t be available in the US for a few more months, but Toshiba Germany has posted a promotional video for this mini-laptop running Google’s Android operating system.

The video is in German, but interestingly all the text on the computer itself is in English. That makes it a bit easier to follow the action — and also seems like a pretty good indication that the Toshiba AC100 should make it to US shores sooner or later.

It also looks like Toshiba has added some custom software to to smartbook. I already knew that the AC100 would use the Opera Mobile web browser instead of the default Android browser. But it also looks like there are custom Toshiba-branded media apps for playing music and movies.

It’s also not entirely clear at this point whether users will be able to download third party apps from the Android Market, but I did spot a few icons for apps on the AC100 home screen, including a popular eBook reader called FBReader. My guess is that any third party apps will come preinstalled.

Update: Now with 100% more English-language video after the break.