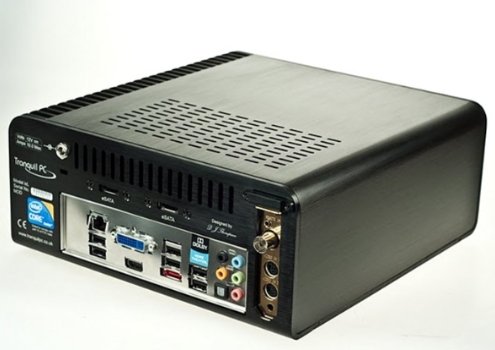 Nettops may have started out as the spiritual cousin of netbooks, with low power processors, tiny cases, and low price tags. But you know what piece never really fit? That underpowered CPU. Because let’s face it, nobody really buys a mini-desktop because they want it to be able to do less. They just want it to cost less, and take up less space — maybe with some energy savings thrown in for good measure. And that’s why the Tranquil PC iXL is such an interesting looking machine.

This mini-laptop isn’t much larger than an ASRock ION nettop. But instead of an Intel Atom processor, this little guy has a 2.93GHz Intel Core i3-530 CPU. The computer still manages to use just over 30W of power while idle. While that’s high by netbook/nettop standards, it still makes this little computer more comparable with a laptop than a typical PC in terms of power consumption.

The Tranquil PC iXL also has DVI, HDMI eSATA, and USB ports, as well as an optical drive bay for a DVD or Blu-Ray drive. There are 2 DDR3 memory slots and a hard drive bay.

Prices start at £389, or about $576 US which seems reasonable — until you realize that the price doesn’t include RAM, a hard drive, operating system, or Blu-Ray drive (It does, however, include a DVD drive). Adding 1GB of RAM, a 500GB hard drive, and Windows 7 Home Premium brought the price up to $812.

Still, while the price could be lower, I appreciate that companies are starting to put out small form factor computers that you could use as home theater PCs, low end gaming rigs, or workhorse computers.