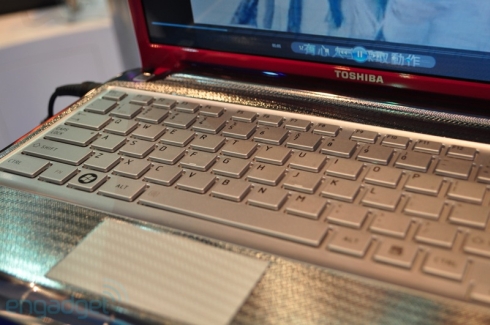 Toshiba is showing off an updated version of its thin and light Satellite M135 notebook at Computex. The M135 has a 13.3 inch display and a low voltage processor, and the new model seems to have a keyboard that’s virtually identical to that on the Toshiba Mini line of netbooks.

In fact, it kind of looks like someone cut the keyboard out of a Toshiba MiniNB305 and just plopped it in a Toshiba M135. The new keyboard actually looks kind of out of place next to the textured metal palm rest.

There’s no word on whether the smaller Toshiba Satellite T115 notebooks with 11.6 inch displays will be getting the same kind of redesign. But Engadget’s Joanna Stern reports that she spotted Toshiba M135 notebooks with the new keyboard sporting both Intel Core i5-u520 and AMD Neo processors.

4 replies on “Toshiba retools its thin and light laptop designs”