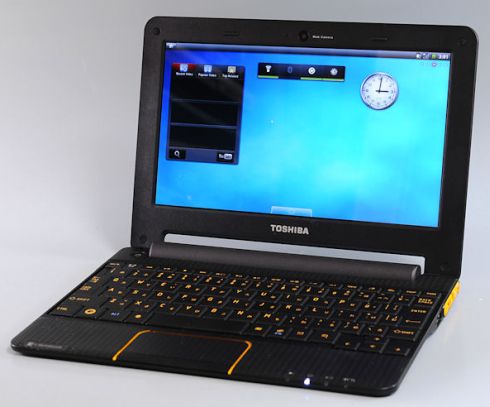 The Toshiba AC100 isn’t due to start shipping anywhere until August at the earliest. But the folks at PC Watch managed to get some time alone with a pre-release unit and they’ve posted a short review.

The device looks like a netbook but functions more like a smartphone, thanks to the NVIDIA Tegra chipset and Google Android 2.1 operating system. But Toshiba made a few interesting choices with the AC100. First, there’s no touchscreen, which means you use the keyboard and touchpad to navigate — something that’s a bit different from typical Android devices which allow you to navigate primarily by touch.

Second, the keyboard has been designed to give you some of the buttons we’ve come to expect on Android phones. There are home, search, back, and menu buttons. Interestingly, the Esc button serves double duty as a back button — bringing back memories of a time when most Windows apps actually utilized the Esc key in one way or another.

Toshiba has also added a number of its own applications to Android 2.1, including a media player, file manager, and a power manager. The smartbook also has a custom program launcher and uses Opera Mobile as the default web browser instead of Google’s Android browser.

PC Watch reports that the Toshiba AC100 does not ship with access to the Android market, which means you’ll have to download and install apk files manually if you want to add your own third party apps. Toshiba is expected to offer a third party solution in the future.

You can find more details, and more pictures, at PC Watch.