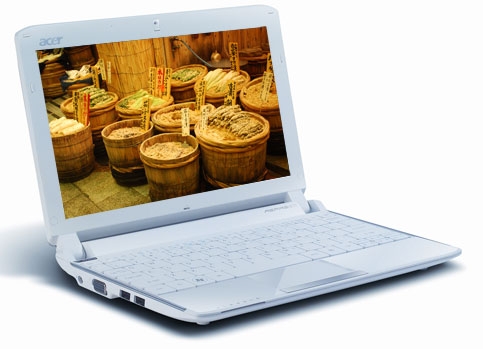 Update: Acer USA has confirmed that it has no plans to launch the Aspire 532G “in the upcoming back-to-school cycle,” although future plans are still being determined. So it sounds like it’s possible the netbook may see the light of day eventually… but it might not.

The Acer Aspire One 532G was on track to be the first 10 inch netbook to ship with second generation NVIDIA ION graphics. But now it loks like the project could be canceled or postponed indefinitely.

French site Blogeee reports that Acer has canceled the Aspire One 532G, although it’s not clear whether the cancellation is global or if it just affects Acer’s French or European divisions.

The Acer Aspire One 532G was first introduced in February, although NVIDIA didn’t officially launch its new ION graphics platform until March.

The netbook was expected to ship with a 1.66GHz Intel Atom N450 processor, and a stripped down version of the NVIDIA ION chipset designed for smaller laptops which would likely overheat if you stuffed the full graphics card into such a tight space. The laptop was expected to have a 10.1 inch, 1024 x 600 pixel display, 802.11b/g/n WiFi, a 6 cell, 4400mAh battery, and Windows 7 Starter Edition and sell for less than $500.

I’ve put in a request for comment from Acer. NVIDIA has already told me that they cannot comment on rumors regarding partners’ products.