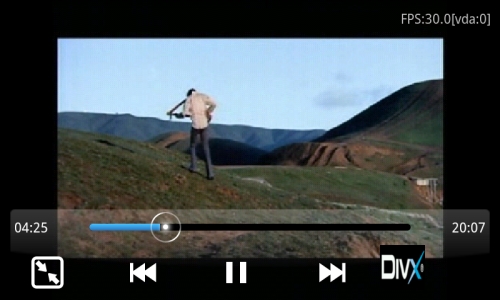 Most Android devices support a handful of media codecs out of the box, including H.264 and MP4. But there are a ton of formats that aren’t typically supported, including MKV, DiVX, Xvid, and WMV. And RockPlayer can handle them all.

The RockPlayer user interface couldn’t be much simpler. When you fire up the app, you’ll see a file browser. Just scroll around until you find the video you want to watch, tap it, and odds are it will start playing.

There are a handful of on-screen controls, including fast forward and rewind buttons, a play/pause button, and a zoom button. Clicking on zoom once will increase the size of the video, while hitting it twice will stretch the video to fit the size of your display — which works pretty well if you have a video that’s formatted with a 16:9 aspect ration, but not so well with 4:3 videos. You can tap anywhere on the video to make the controls go away.

Because most Android devices don’t have hardware decoding support for DiVX, WMV, and many other codecs, RockBasePlayer can be somewhat taxing on the CPU. You’ll probably have best results using a device with a fairly speedy CPU. I had no problems watching videos on a Google Nexus One.

Up until now the best app I’d found for playing DiVX and Xvid movies was Wuzhenhua Player. RockBasePlayer blows that app out of the water when it comes to ease of use, codec support, stability, and perhaps most importantly, the ability to watch videos in landscape mode.

Update: Since this article was originally published a number of excellent alternatives have arrived on the scene… which is a good thing, since RockPlayer seems to have fallen by the wayside. The last update was in 2013.

Check out our list of 14 great video players for Google Android.