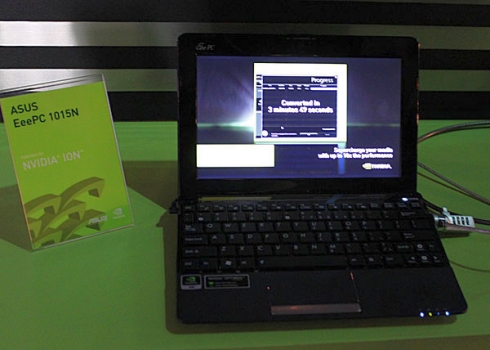 Were you disappointed to learn that the Asus Eee PC 1201PN wouldn’t have NVIDIA Optimus technology as had originally been promised? Don’t worry, it turns out Asus will be offering 10 and 12 inch mini-laptops with Optimus, and Acer’s upcoming 10 inch netbook with next-generation NVIDIA IOn graphics will as well.

NVIDIA Optimus is a system that lets computers with NVIDIA ION graphics and integrated Intel graphics automatically and seamlessly switch from one to the other. If you’re surfing the web, your PC will use the lower power Intel graphics to prolong battery life. When you click on an HD video, the ION graphics will kick into gear to give you a performance boost — even on a computer with a low power Intel Atom processor.

Laptop Magazine stopped by the NVIDIA area at Computex this week and found 13 notebooks on display that were using Optimus technology. That includes the Acer Aspire One 532g, the 12 inch Asus Eee PC 1215PN, and the 10 inch Asus Eee PC 1015N.

Hopefully we’ll start to see these computers hit the streets in the coming months.