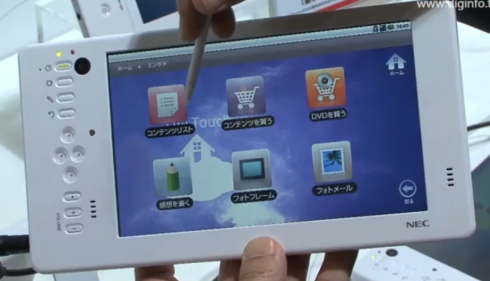 The NEC LifeTouch is a 7 inch Android tablet with an 800 x 480 pixel display, an ARM A8-based CPU, and a rather large number of buttons to press. We saw a few rendered pictures of the tablet last week, but now there’s a video making the rounds showing the LifeTouch tablet in the flesh plastic.

It turns out the tablet has even more buttons than I thought, although the D-pad seems to have been replaced by four directional buttons. There are also buttons for power, home, menu, and back functions, amongh other things.

The tablet is running Google Android 2.1 and includes 802.11b/g WiF and Bluetooth 2.1. There’s also an accelerometer for rotating the display, GPS, and a 3MP camera.

NEC has loaded some custom software on top of Google Android, and the tablet is apparently aimed at businesses looking to customize their own software. NEC isn’t expected to offer the tablet directly to consumers. Instead, businesses may offer tablets to their clients. That said, the video below shows the device acting as a comic book reader, video player, and all sorts of other functions that look awfully consumer friendly to me.