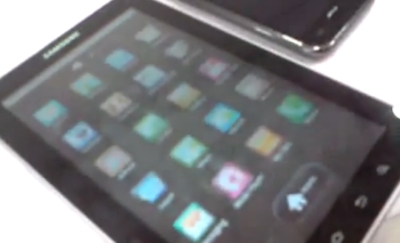 Another day, another set of rumors regarding Samsung’s upcoming Galaxy Tab 7 inch Android tablet. We already know the name and that Samsung plans to release the tablet by the third quarter of this year. And we already got a good look at a prototype, thanks to a slip up from Samsung South Africa. But then yesterday a video started making the rounds, showing a similar 7 inch tablet with a different button layout.

Now Engadget is posting some details from an anonymous (but apparently well-informed) tipster. Basically, this person says the 7 inch tablet is just about as thin as an iPhone, and that you’ll be able to make phone calls on the tablet by using a Bluetooth headset.

There’s reportedly a front-facing camera and mic, which you can use to make video calls, and also a 3.2MP webcam on the back for recording video or shooting pictures. The tablet is said to come with Bluetooth, WiFi, 3G, and GPS, and supports and WiFi or USB tethering. Finally, the tablet appears to be running Android 2.2 Froyo.

I’d take all this info with a grain of salt. Not only could the tipster be a hoaxter… but it’s also possible that Samsung could change things up a bit before actually releasing the final product.