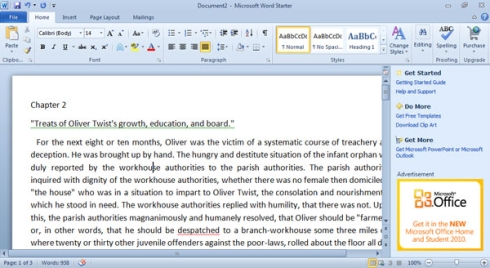 Laptop Magazine’s KT Bradford has taken a look at Office Starter 2010, and she’s come to the verdict that you’re better off just scrapping it and installing Openoffice.org or the alternate office suite of your choice. Or you know, you could do what Microsoft is hoping you’ll do and pay to upgrade to a full version of Office 2010.

What’s missing from Office Starter 2010? Well, for starters, there’s no support for footnotes, endnotes, citations or bibliography, comments, track changes, Pivot Tables, or Pivot charts. And that’s just the tip of the iceberg.

A bigger problem (literally) is that the user interface is clearly not designed for netbooks with 1024 x 600 pixel displays. The ribbon UI eats up an awful lot of space at the top of the page, and there’s a large sidebar with an ad on the right that takes up even more space — leaving you with very little room to work on a typical netbook.

If you just need to create some basic rich text documents or simple spreadsheets, Office 2010 Starter may do the trick. But so will OpenOffice.org, AbiWord, or Gnumeric. The one thing Office Starter 2010 still has going for it is complete compatibility with Office documents. If you need to open a doc someone else created in Office, there’s a decent chance it won’t look quite right in a third party app. But you could also just use Office Web Apps instead of Office 2010 Starter if you just need to open the occasional Office document.