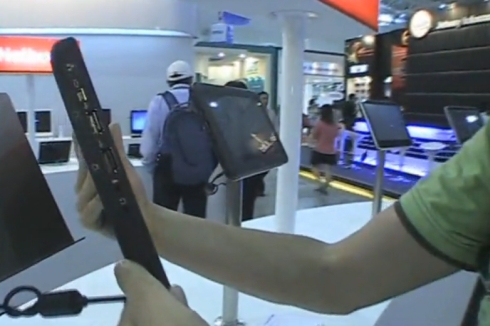 PC maker Malata is showing off at least 4 tablets at Computex this week, although you can generally break them down into two categories: Windows 7 tablets and Google Android tablets.

On the Windows 7 front, jkkmobile spotted two very similar machines called the PC-A1001 and the PC-A1001H. Both have 10.1 inch, 1024 4x 600 capacitive multitouch displays, as well as a stylus designed to work with the capacitive screen.

The two Google Android tablets jkkmobile spent time with both have 10 inch displays. But the SMB-A1001 has a Samsung ARM Cortex-A8 based processor while the A-1011 is powered by NVIDIA’s Tegra 2 chipset. The Tegra model will be able to handle 1080p HD video playback as well as 3D graphics, but it’s worth pointing out that both Android tablets had HDMI ports, which seems to indicate that Malata expects them both to be able to handle at least some HD video.