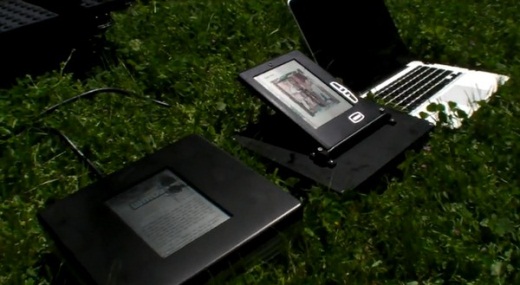 Liquavista’s color and monochrome screens have looked impressive in demos we’ve seen to date — but their performance in direct sunlight was still an unknown. That’s all changed now, as the folks at ARMDevices managed to secure a little outdoor time with the displays on a bright, sunshiney day.

As you can see in the image above, a traditional laptop display doesn’t hold a candle to the Liquavista screen on the middle device (presumably an eReader of some sort). Better still, Liquavista claims that the improvement in outdoor readability doesn’t involve major modifications to the way existing LCD displays are manufactured.

That’s good news, and should allow for more widespread adoption of the technology by other manufacturers. Unfortunately, that’s not going to happen for a while yet — the displays aren’t set to go into production until 2011.

Check out the video after the break to see the side-by-side-by-side comparison.