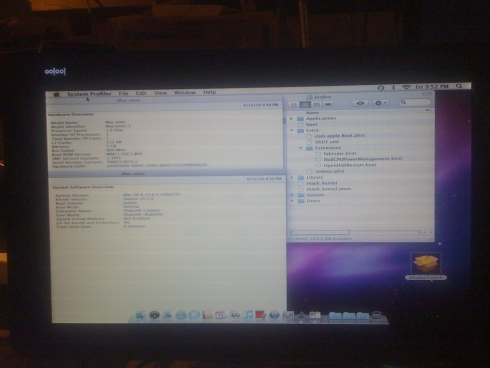 Remember a few days ago when hackers installed Windows 7 on a JooJoo 12 inch tablet? Now it looks like you can do the same thing with OS X.

That shouldn’t come as a huge surprise. The JooJoo tablet basically has the same specs as a netbook, including an Intel Atom processor and NVIDIA ION graphics. And we’ve seen plenty of netbooks running Windows 7, OS X, and other operating systems. But since the JooJoo tablet ships with a particularly stripped down version of Linux which is designed to offer you a web browser and little else, you could make the case that installing an alternate operating system makes the tablet a heck of a lot more useful.

OS X may be a particularly good fit if you were hoping that Apple’s magical tablet was going to run the full desktop operating system instead of the same OS used by the iPhone and iPod touch.

The member of the JooJoo Forum that installed OS X says that the touch panel drivers still need some work and the installation process was “quite the pain,” but something tells me this is just the first of many JooJoo OS X hacks we’ll see. Or given the low sales numbers, maybe just the first of few.

via Cult of Mac

One reply on “JooJoo tablet hacked to run OS X”