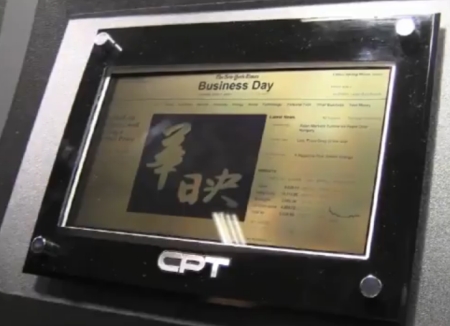 Pixel Qi has gotten a lot of attention lately for its display which combines some of the best elements of a E Ink and full color displays. Indoors, you can use the screen in full color mode and you’d have a hard time telling it apart from any other display. Outdoors, you can shut off the backlight, reduce the screen’s power consumption by about 500 percent, and easily see the screen in direct sunlight.

But Pixel Qi isn’t the only company working on this sort of technology. Netbook News spotted a transflective display from CPT that promises similar functionality. The company is demonstrating a 10.1 inch, 1366 x 768 pixel display with wide viewing angles that works with the backlight off.

The CPT screen doesn’t seem to be quite as energy efficient as Pixel Qi’s solution. Instead of drawing 5 times less power with the backlight off, it cuts energy consumption by 50 percent. That ain’t bad, but it could certainly be better.

Nicole Scott from Netbook News suggests that text doesn’t look quite as sharp with the backlight off.

Transflective displays aren’t entirely new. If I remember correctly, a number of early Windows Mobile and Palm PDAs used similar technology nearly 10 years ago. But it should be interesting to see how CPT’s solution scales to netbooks or tablets.

You can check out Nicole’s hands-on video after the break.