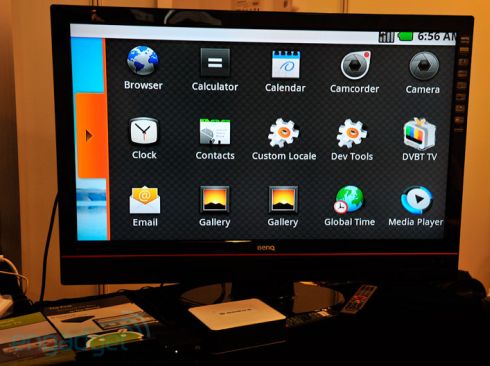 There’s a rumor going around that the next-generation Apple TV will basically be a $99 iPod touch without a display which you can plug into your TV to watch iTunes, web video, and other content. But it looks like Apple isn’t the only company that’s decided the best way to play downloaded and online video on a big screen TV is to plug in a smartphone-like device.

Engadget spotted an intriguing little box from a company called Bonux at Comptuex this week. Basically, it’s a set top box running Google Android with support for a wide range of video formats. The user interface hasn’t been customized for TV screens at all. Basically what you see on a 40 inch screen is what you would see on your 3.7 inch phone screen.

But the advantage of using Android as opposed to, say, Windows or a full blown Linux distribution running MythTV, Boxee, or another media center app is that you can run Android on some pretty seriously low power hardware. All you need is an ARM-based processor with high performance video capabilities, maybe a hard drive or solid state disk, and you’re good to go. And that means your set top box can be the size of a deck of cards.

On the other hand, Bonux doesn’t expect to bring their product to market until later this year, and by the time it hits the street the company may have some competition from Sony, Logitech, and other companies working on devices based on the new Google TV platform which is actually optimized for the big screen experience. Oh yeah, plus Google TV will be able to handle Android apps. So tell me again why anyone would want a Bonux box?

You can find more photos and a hands-on video at Engadget.