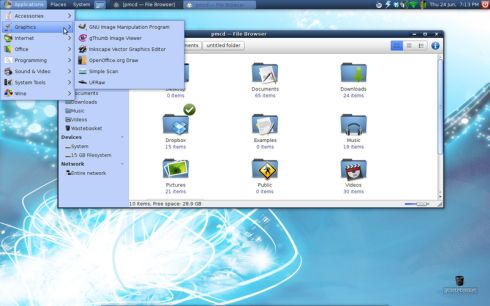 EeeBuntu Linux has been one of the most popular independent Linux distributions for netbooks for the last few years. And when I say independent, as the name makes clear Eeebuntu started out as a modified version of Ubuntu Linux — which is maintained by a nice big institution called Canonical. But Eeebuntu releases typically pack a number of customizations that make Ubuntu run better on low power netbooks with small displays. The latest release wasn’t even based on Ubuntu anymore, instead using Debian Linux as its base (Ubuntu is also Debian-based).

Anyway, the Eeebuntu name can be a bit confusing and the folks at Canonical have already pressured the makers of Ubuntu Eee into changing that operating system’s name. So I wasn’t all that surprised to find the Eeebuntu is finally getting a new name: Aurora.

Like Eeebuntu before it, Aurora is a light weight Linux distribution designed for netbooks. The new version is a bit of a departure from Ubuntu, in that instead of installing a new OS every six months, users will instead get service pack-style updates. The installer will also be updated quarterly so that new users will be able to download the latest version.

The first version of Aurora is based on the open source GNOME desktop environment, and ships with Firefox as the default web browser, although Google Chrome, Opera, and other browser options are available. The operating system also includes Thunderbird for email, Pidgin and Gwibber for instant messaging and Twitter, and OpenOffice.org for creating and editing office documents. The VLC media player comes standard, as does Banshee for music playback and synchronization with portable media players.

You also get a power management tool and the ability to quickly and easily change the screen resolution and other settings common to most Intel Atom-powered netbooks.

Aurora will be available soon as a free download.