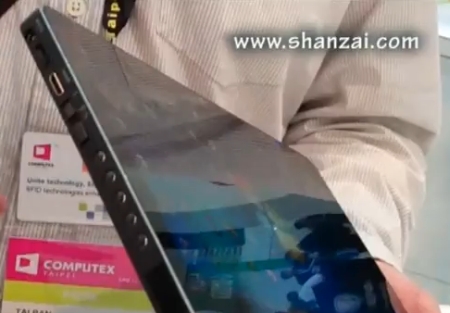 The Apple iPad runs a simple operating optimized for touchscreen displays, and the screen is practically the only thing you use to control the device. Sure, there’s a power/home button and volume buttons, but that’s about it. The Anadem P101 is the opposite. OK, I guess the opposite of a tablet might be a ball or something, but the P101 is about as far from the iPad philosophy as you can get with a tablet.

The P101 is powered by a 1.66GHz Intel Atom N450 processor and runs Windows 7. That’s not particularly unusual for a tablet these days. But the sides of the tablet also seem to be littered with ports and buttons. On the left side alone, there are 5 different function keys, a WiFi toggle, and HDMI output. The right side of the tablet has 2 USB ports, mic and headphone jacks, and an SD card slot. It all seems kind of useful, but not very Apple-like, which is probably a good thing for people looking for choice.

The folks at Shanzai.com got a chance to check this 10 inch tablet out at Computex. You can check out the video below. The Anadem P101 weighs about 1.8 pounds and should sell for between $300 and $400.