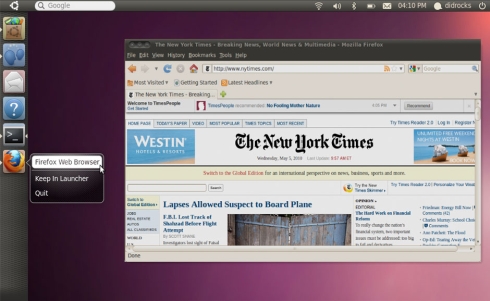 Ubuntu is a full-fledged Linux distribution that provides all the tools you’ve come to expect from a desktop operating system, including a web browser, office suite, communication and security features, and the ability to run thousands of third party apps. But like Windows, OS X, or any other desktop operating system, it can take a minute or longer to boot, depending on your hardware.

What separates Ubuntu Light from Ubuntu is that Canonical designed Ubuntu Light specifically to be a quick-booting operating system. It joints Splashtop, HyperSpace, and other light weight Linux distributions in this space. It isn’t meant to completely replace your primary operating system. Instead, you can load it up on a dual boot system, so you have the choice of loading Ubuntu Light and launching your web browser in just a few seconds, or loading up your full desktop operating system for more resource-intensive tasks.

Here’s one of the most important things you need to know about Ubuntu Light right now: It doesn’t support adding and removing programs. That’s a large part of the reason why the OS can boot so quickly. there’s also no support for file management.

For Ubuntu Light, Canonical redesigned the user interface to focus primarily on the apps that you’ll run most often: A web browser, email client, and maybe a few other apps. The new interface is called Unity, and it basically has an app dock on the side of the screen and a panel at the top. In a blog post, Canonical founder Mark Shuttleworth says that “rather than making it equally easy to access any installed application, we assume that almost everybody will run one of a few apps, and they need to switch between those apps and any others which might be running.”

If the dock looks rather Windows 7-like, that’s because both Microsoft and Canonical were focused on improving the touch experience. You want nice big icons if you expect some users to be poking their fingers a touchscreens to tap them. The app dock and panel together take up much less space than the full-screen program launcher used for Ubuntu Netbook Edition, and Shuttleworth says the goal is to use the new user interface in future versions of Ubuntu Netbook Remix starting in Ubuntu 10.10 which should be released in October.

While Ubuntu Netbook Edition will use the Unity user interface, it will be a full fledged operating system, which means you’ll still be able to install and remove apps.

Ubuntu Light will be available in desktop and netbook editions. The idea is to offer a light-weight, quick-booting version of Ubuntu to PC makers so that they can easily load the operating system side by side with Windows or another operating system — which could substantially boost Ubuntu’s user base.

Canonical says Ubuntu Light is available to OEM’s starting today. It’s not clear at the moment whether a user-installable version will be available in the immediate future.

Update: While you can’t download and install Ubuntu Lite just yet, you can try the new Unity user interface if you’re already running Ubuntu Netbook Edition. GadgetMix has the details.