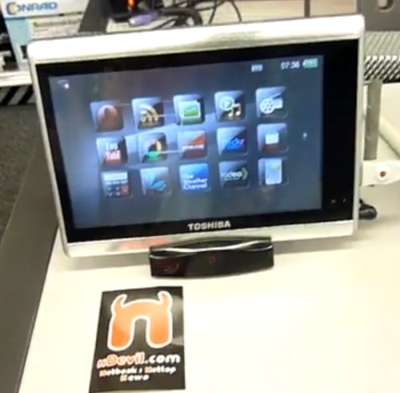 It’s been almost 9 months since Toshiba first introduced the JournE tablet, and now it’s finally available for purchase… if you happen to live in Germany, where you can pick one up for about 249 Euros ($308 US).

The folks at nDevil grabbed some hands-on time with the tablet, which is running a tweaked version of Windows CE. The program launcher looks decent and the tablet is pretty responsive. But you’re still stuck with the Windows CE version of Internet Explorer, which isn’t exactly my favorite mobile web browser.

There are also a handful of custom apps including a YouTube player, RSS reader, music and video players, and a photo app.

The on-screen keyboard looks like it’s designed for stylus input rather than taping with your fingertips. The tablet has a 533MHz Samsung ARM 11-based processor. It has a 2200mAh battery and an 800 x 480 pixel touchscreen display.

Overall, the Toshiba JournE looks like an interesting entry into the handheld tablet space. But I’m not sure Toshiba has made a very compelling case for spending $300 on the tablet when you can pick up a Google Android-powered Archos 5 or Archos 7 tablet with a faster processor for less money.

You can check out nDevil’s hands-on video after the break.