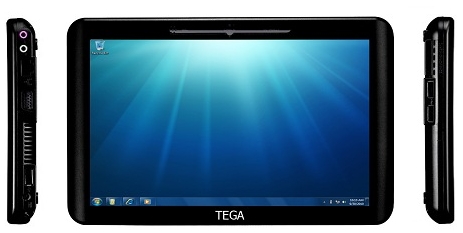 Hugo Ortega has been a member of the tablet enthusiast community for years, so when he decided to launch his own tablet called the Tega, I figured we might be in for something special. Unfortunately, now that the tablet is almost ready to launch, I have to say it looks pretty mundane.

Ortega plans to launch the Tega at CeBIT Australia starting on May 24th. The tablet has a 10.2 inch, 1024 x 600 resistive touchscreen display and a 1.6GHz Intel Atom N270 processor. It comes with a 3500mAh battery and the base configuration ships with 1GB of RAM and a 160GB hard drive.

In other words, it looks a lot like every other Windows tablet we’ve seen for the last few months.

But there are a few things that make the Tega stand out. First, it includes a built in HSDPA modem. Second, you’ll be able to purchase the tablet either with Windows 7 or without an operating system at all, making it easy to install your own. And third, there are a number of upgrade options. For instance, you can get the tablet with up to 4GB of RAM or a solid state disk ranging from 16GB to 128GB.

Still, it would have been nice to see a model with an active digitizer option.

One reply on “Tega Tablet: A tablet PC designed by enthusiast Hugo Ortega”