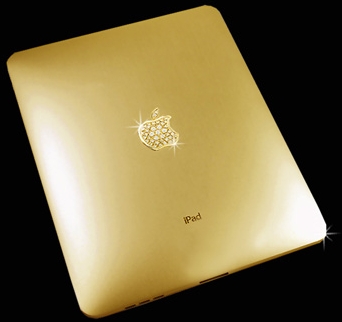 Here are a few stories about tablet computers making the rounds today:

Sony could launch a tablet

Sony has long been regarded as the Apple of Windows PC makers. The company likes to present its computers as higher quality, more expensive versions of the standard fare offered by competitors HP, Dell, Acer, Lenovo, and others. So it’s no surprise that Sony wants in on the whole tablet thing that Apple has made so popular.

All in all, it sounds like Sony is still taking a wait and see approach, though, and we won’t see a Sony tablet anytime soon.

If you’re in the market for an Apple iPad, but just don’t feel comfortable carrying around something that only costs $500 to $829, Stuart Hughes has got a proposition for you. Why not drop nearly $200 grand on an iPad SUPREME EDITION that’s been plated in gold and encrusted with diamonds?

Dell has been showing off the Dell Streak 5 tablet with Google Android for the past few months. But eWeek reports that CEO Michael Dell has finally announced that the device will be available soon.

He says Telefonica 02 will start offering the 5 inch tablet in Europe starting next month. It should be available from AT&T in the US “later this summer.”

via Engadget, Eee PC.net, and Mashable