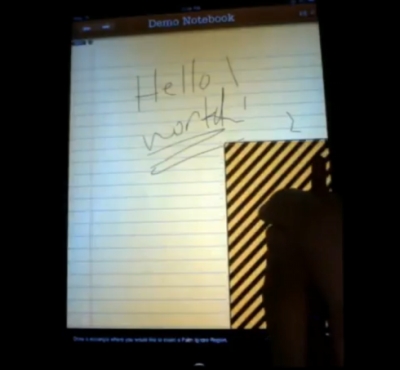 One of the iPad complaints I hear from long-time tablet PC enthusiasts is that the Apple iPad’s capacitive touchscreen isn’t really designed for accurate drawing or handwriting. That’s because it doesn’t recognize pressure-sensitive input and it doesn’t automatically ignore input from your palm. That means if you rest your palm on the screen while using a stylus or fingertip to draw, you might accidentally end up scribbling with your palm and finger/stylus at the same time.

Some people have found a way around this, by essentially putting a sock or other piece of cloth between their palm and the iPad screen. This works because the capacitive touchscreen recognizes electrical impulses from your skin — and the cloth masks that.

But the folks behind the smartNote app for the iPad have come up with a solution that doesn’t require you to carry around an extra sock. If you want to draw or write in smartNote 1.02, all you have to is set up a palm ignoring area. You can adjust the size of the palm ignoring area and when you rest your hand on the screen to write, all input in that box will be ignored. The really cool part is that the box moves with your hand, so you don’t have to keep your palm steady as you try to write.

The app isn’t just designed for inking on an iPad. It lets you type and draw notes, set text input areas, delete notes, change fonts, text styles, and other settings.

You can see the smartNote palm ignoring tech in action in the video below, starting at about the 4 minute point. The app is available for download from the iTunes App Store for $0.99.

4 replies on “SmartNote for iPad lets you write, draw with palm-ignoring technology”