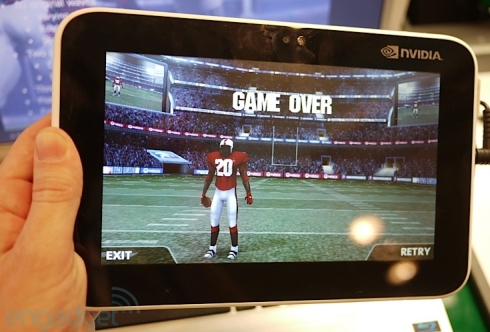 NVIDIA is demonstrating the power of its Tegra 2 platform which combines an ARM-based processor with NVIDIA graphics by showing off a tablet prototype with a 9 inch display and a tweaked version of Google’s Android operating system.

The folks at Gizmodo, Engadget, and Netbook News got to spend some hands-on time with the tablet at Google I/O yesterday, and you can check out a video courtesy of Netbook News after the break.

Basically, the tablet has an 8.9 inch display, a 1GHz Tegra 2 processor, WiFi, a webcam, accelerometer mic and headphone jacks as well as 2 USB ports, an SD card slot, micro SD card slot, and a SIM card slot for 3G access. It’s running Google Android 2.1 and has a capacitive touchscreen display with support for multitouch.

The tablet can handle 720p HD video playback as well as some pretty impressive 3D graphics.

Overall, the tablet looks like a pretty nice Android-powered alternative to the Apple iPad  — if Google opens up the Android Market to non-smartphone devices. There’s no word on pricing or release dates yet, but as far as I can tell this is simply a reference design built by Taiwanese PC maker Foxconn at this point. The tablet probably won’t make it to market with the NVIDIA branding, as NVIDIA doesn’t send to sell complete devices like this. Instead, it’s likely that NVIDIA is shopping around the platform, looking for PC makers looking to bring a similar device to market.