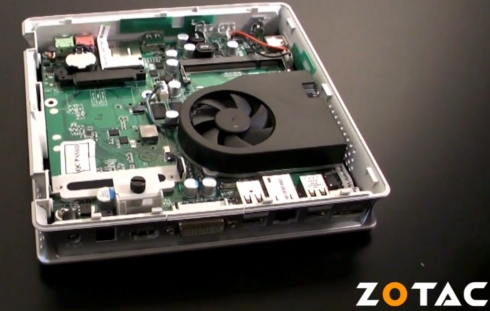 It’s kind of hard to make a nettop stand out from the crowd these days. Sure, you can come up with some sort of flashy design, but we’ve seen plenty of small form factor desktops with low power processors in the last two years. Some have optical disc drives, others don’t. Some have integrated graphics, while others have higher quality graphics for HD video playback. But here are wo models that do have stand-out features.

The latest version of the long-running Asus Eee Box ups the game with two high speed USB 3.0 ports for blazing fast data transfer. The rest of the specs are pretty much the same as those for the original Eee Box BE1501. The nettop has a dual core 1.6GHz Intel Atom 330 processor, 2GB of RAM, 250GB hard drive, Windows 7 Home Premium, and a DVD burner. It has first-generation NVIDIA ION grpahics.

The Eee Box EB1501U isn’t available in the US yet, but it’s available for order from Amazon Germany.

This nettop from Zotac is one of the first to include NVIDIA’s second-generation NVIDIA ION graphics chip with 16 graphics cores. It also has a dual core Intel Atom D510 Pine Trail proesor, HDMI and DVI output, 6 USB ports, an eSATA port, a 6-in-1 memory card reader and audio I/O ports.

Zotac’s nettops tend to be DIY/barbones kits, which in this case means the ZBOX HD-ID11 ships without a hard drive, memory, or operating system.

The nettop isn’t available for purchase yet, but the folks at Zotac have posted a video overview and unboxing, which you can check out after the break.