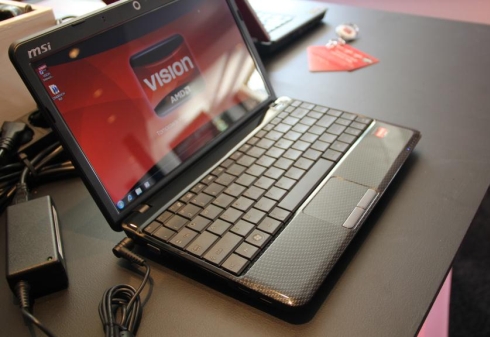 Remember that MSI Wind U250 notebook that we spotted on the US Energy Star web site a few months ago? No? That’s OK, I’d kind of forgotten about it myself — until it showed up at an AMD event in Cannes yesterday.

The folks at NewGadgets.de got a chance to snap a few photos of a pre-production version of this 12.1 inch notebook with an AMD processor. There’s not a lot of information about the specs at the moment, but according to the Energy Star web site, the notebook will have a 1.3GHz AMD Athlon II Neo dual core K325 processor — which just so happens to be one of the new low power chips for ultrathin laptops that AMD introduced yesterday.

The K325 has a total power draw of 15W and 2MB of L2 cache. It’s basically the slowest/cheapest dual core AMD processor for ultrathin notebooks. It will also support up 4GB of RAM and a 320GB hard drive.