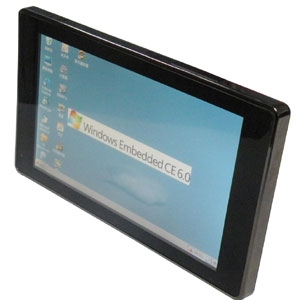 HP may have already killed its Windows 7 tablet in favor of one running Palm’s WebOS. When Apple wanted to build a tablet, they didn’t put a desktop operating system on it, but instead spruced up the iPhone operating system for the iPad. And dozens of Google Android powered tablets are showing up in China — with at least a few expected to hit the West later this year.

While Bill Gates and company pioneered the tablet PC space about 10 years ago, the current crop of tablets don’t look that much like Microsoft’s original vision of a tablet. There’s no stylus, no handwriting recognition, and no keyboard that folds up under the display. Most importantly, many of the tablets that are either available or in the works don’t run Windows and don’t run full blown desktop applications. Instead, they have low power processors, long battery life, and run smartphone-like operating systems and apps.

And that makes a lot of sense, because Windows wasn’t designed for use with a stylus or fingertip. While Microsoft has added tablet functionality to most versions of Windows 7 (but not Windows 7 Starter), what you get are a bunch of add-ons that attempt to make it easier to use software that was never designed to be run on a tablet in the first place.

So there’s a part of me that really thinks Microsoft should be pushing Windows CE, Windows Phone 7, or the Zune HD software for use on tablets — because I can see tablets with this kind of Windows CE-based operating system being a heck of a lot more usable — even if you can’t run desktop versions of Photoshop and Word on them.

But ZDNet’s Mary Jo Foley reports that Microsoft may have another approach. The company is apparently working on a top secret project code-named Menlo, which would replace the Windows CE core with Windows NT. That’s the same core Windows 7 (and Vista, and XP, and 2000) are built on. In other words, you might one day be able to pick up a Smartphone that can run some of the same apps that are available on your desktop or laptop computer, and not just stripped down, rewritten versions of those apps.

There aren’t a lot of details about Menlo at the moment, but if this is true, it could mean that Windows, or at least a version of Windows would be able to run on low power ARM-based smartphones and tablets. Or it could be that Microsoft is working with Intel, which is working to get low power x86 processors into smartphones.

But the question I still have is this… even if you’ll be able to run Windows on a smartphone in a few years, will apps be built to incorporate touch input? If every single Windows app of the future features both touch and keyboard-and-mouse input, this could work.

Of course, there may still be a space for an old fashioned tablet or two with an active digitizer, stylus, keyboard, and other amenities. The truth of the matter is that there’s been a market for these devices for the past decade — it’s just a relatively small market.