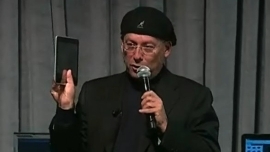 Sure, with HP putting its Windows 7 tablet on hold, you might think the tablets of the future are all going to be built with ARM-based chips similar to the one used in the Apple iPad. But Intel VP Mooly Eden wants to make it clear that Intel has big plans for the tablet space.

At an investor meeting yesterday, he showed off two new prototypes using next-generation dual core Intel Atom chips. The first was a ridiculously think netbook, while the other was a handheld tablet that appears to be smaller than an iPad, but which Eden says supports USB and SATA connections. And he points out you’ll be able to connect it to your printer — although it will clearly help if the tablet is running an operating system with drivers for your printer — which would kind of imply Windows… or maybe MeeGo Linux.I’ve always thought MeeGo’s full screen user interface would make more sense on a tablet than a netbook anyway.

Word on the street is that we might see some new Intel-based tablets at the Computex trade show in Taiwan next week.

Incidentally, while some folks have been proclaiming that netbooks are dead and that the iPad is responsible, Intel suggested that there’s pretty strong evidence that the netbook is still alive and kicking and could exceed 20% of all notebook shipments this year. You can check out a few slides from Eden’s presentation after the break. 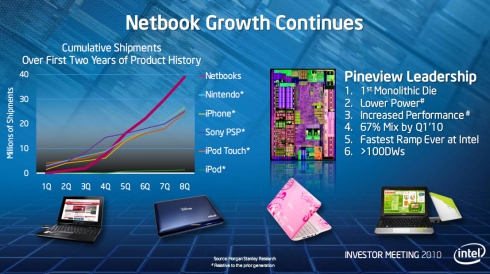 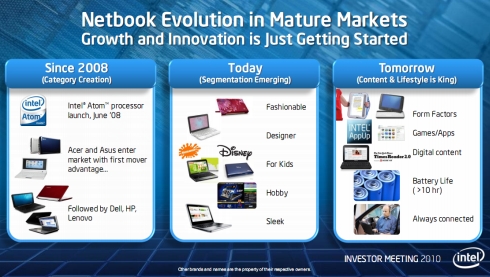 4 replies on “Intel: Tablets with our chips will support USB, SATA, multiple cores”