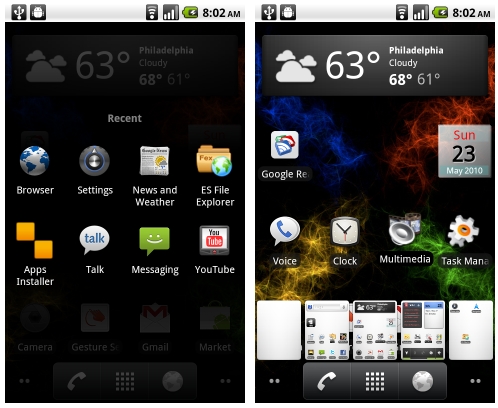 Google began rolling out Android 2.2 Froyo for Google Nexus One smartphone users this weekend. It could be days or weeks before all Nexus One users get the update, but if you’re not the patient type, you can download and install Froyo manually. I’ve been playing with Froyo on my phone for a little less than a day, and I have to say I’m pretty impressed overall.

There are also phone and web buttons across every page of the home screen, making it easier to fire up the two most frequently used apps on most phones.

But the bigger changes are under the hood. Android 2.2 features a faster Java compiler which could increase the speed of third party apps by as much as 200% to 500% in some cases.

And Android 2.2 lets you share your 3G data connection with a computer by either turning your phone into a WiFi hot spot or tethering the phone to a PC with a USB cable. Oh yeah, you can also install the beta version of Adobe Flash Player 10.1 for Android 2.2 to watch online video, play Flash games, and do pretty much anything else online.

Flash is still a little slow, and web pages that aren’t optimized for mobile devices can be a bit tricky to navigate with Flash. But Flash performance is about a zillion times better on Android than it is on the iPhone at the moment.

You can check out two hands-on videos with Android 2.2 Froyo on the Nexus One after the break.

For more details, and a list of more than 20 new features, hit up Mobiputing for a look at what’s new in Google Android 2.2 Froyo.