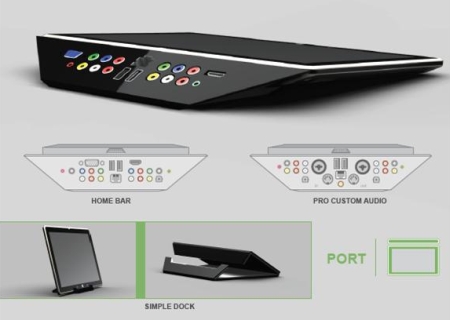 The folks at Freescale Semiconductor introduced a tablet reference design earlier this year that manufacturers could use to put out web tablets that should cost as little as $200. But over the past few weeks Freescale has been sharing some research on their blog indicating that tablets aren’t a one-size-fits-all category. Some people will want tablets for playing games, while others will use them for creating music. And of course, plenty of folks will want tablets for surfing the web or watching video.

Students at the Savannah College of Art and Design came up with a series of concepts for tablets targeted at 9 different demographic groups.

We’ve only seen the results of four projects so far, but they’re pretty interesting — and they make a good case that there’s room for more than one kind of handheld tablet in the market.

The first concept is aimed at 12-14 year old kids, with a heavy focus on gaming. This tablet has a slide-out keyboard and gamepad for sending text messages and playing video games.

The second is targeted at “young professionals,” and offers a combination of entertainment and productivity options, including a large screen for reading eBooks and stylus input to make note-taking easier. The concept design also has a flip-out software keyboard that lets you type on the on-screen keyboard much as you would with an iPad — but which would also let you prop up the screen so you don’t strain your neck while typing. I can’t help but feel like the flip-up screen would be cost prohibitive at this point, but that’s the fun thing about concepts… you don’t actually have to build them.

Concept number three is aimed at elementary school students between the ages of 8 and 10. Basically the goal here is to create a handheld gaming device that competes with the Nintendo DS, Sony PSP, and Apple iPod touch. This concept includes an optional docking station, keyboard, and remote control and a rugged design.

The fourth concept takes aim at college students with an artistic side. The tablet design features a docking station with a huge array of ports for connecting the tablet to other electronic equipment. for example, you could plug the tablet into an audio system and use it as an electronic drum pad or mixer for a DJ setup.

There’s absolutely no guarantee that any of these devices will make it to market. But it’s fun to see some smart people thinking of possible uses for tablets. You can keep up with the Freescale/Savannah College project at the Freescale Smart Mobile Devices blog.

One reply on “Freescale shows concept tablets for every occasion”